As you know, I am trying to keep my spending on storage containers to a minimum as I reorganize the house. Reusing and repurposing is my main focus.

But I was really stumped when it came to what I wanted to do for a "work in progress" (WIP) basket. I wanted a place where I could put projects that I was either in the middle of doing or about to start working on. I also wanted something that was large enough to hold a few projects, but small enough to fit on a shelf easily. It also needed to be un-lidded, because I know that if a project is out of sight, it is out of mind for me. Which means those works in progress will never actually make any progress.

I had resigned myself to keeping my current WIPs in a lidded file box (you'll get to see those tomorrow) that was too tall, not wide enough and had a lid, so none of the things I was looking for in a WIP basket, but it was readily available, so I settled for it.

On Sunday we did a Costco run. They provided us with a box for our purchases, and as soon as I laid eyes on it, angels began to sing. It. Was. Perfect. 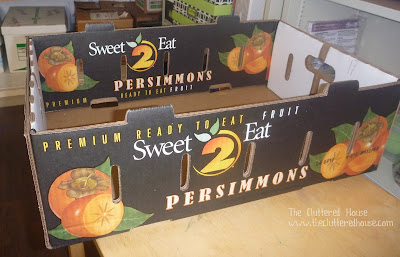 It also conveniently fits an on the small side 4 3/4 year old, so that is a bonus too! 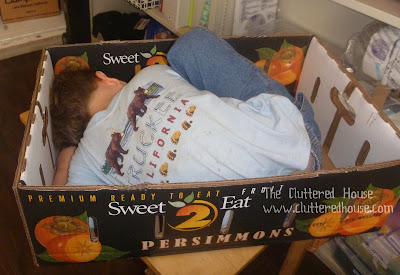 I had some cute wrapping paper that I had purchased months ago on clearance at Target, so I set to work! 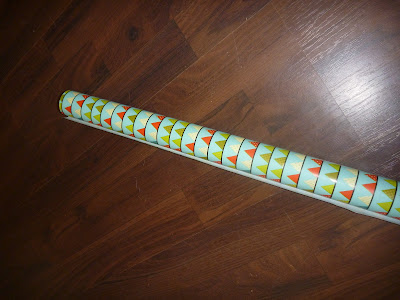 First, I had to trim off the nubbins at the tops of my "basket." Anyone will tell you that nubbins are no good! 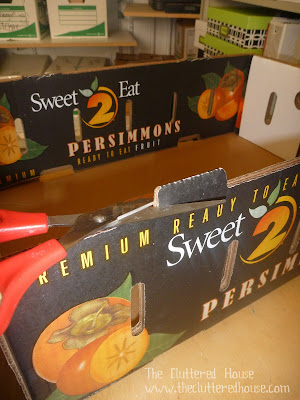 Then I rolled out my paper, got an approximation of the length of paper I would need to wrap it lengthwise. Then I sprayed adhesive on the bottom of the box and affixed it (crookedly) to the paper. 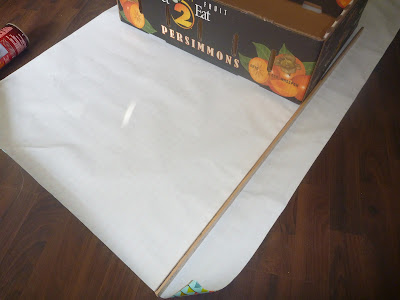 I then used my yard stick and a pencil to create cutting lines on all four sides of the box. 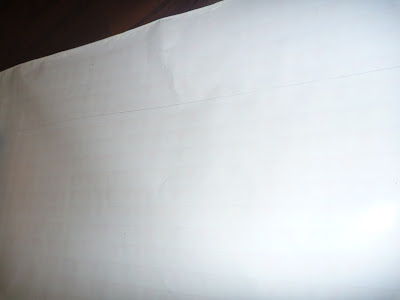 Using the lines as a guide, I cut all the way to the box and then in from the sides, to create flaps. 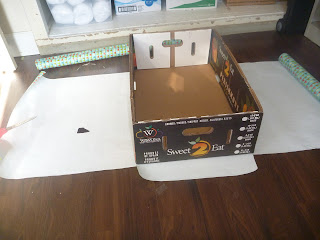 Then I realized I had started with the wrong side and that if I did it this way, the front of the box was going to have all kinds of crazy folds and lines, and the sides would be all neat and smooth. So I had to rip all the paper off and start over (but remember those directions for later). 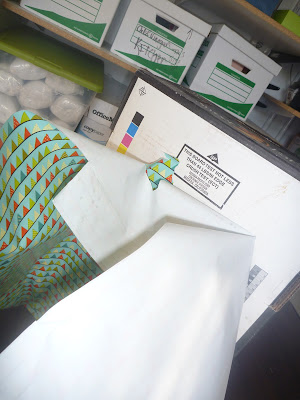 I salvaged as much of the paper as I could and began working on the two sides of the box. I knew that I was going to be covering the entire bottom of the box when I covered the front and back of it, so I went ahead and cut enough paper to just stick on the bottom (about 5") and then come up the side and into the interior of the box. 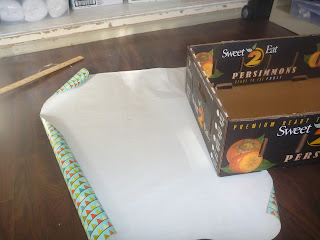 I sprayed adhesive on the face of the side and smoothed the paper over it. 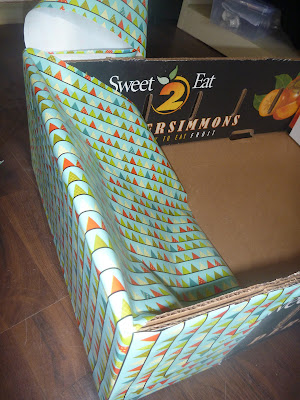 Then I folded the piece of paper on the front and back faces like you would fold it when gift wrapping and cut away the excess, leaving only a piece to adhere to the inside of the box. I sprayed more adhesive and smoothed the interior piece down. I now had one side completed. 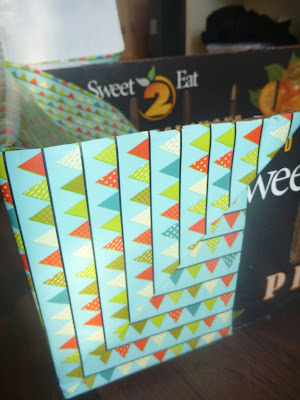 It was at this point in time where I realized that using spray adhesive in the craft room wasn't such a great idea. Not only was I getting a little woozy from the fumes, I was also getting spray adhesive all over the floors.


So production moved outside. To my ever so fabulous backyard, which is both overgrown and disheveled, so be kind...

I finished the other side 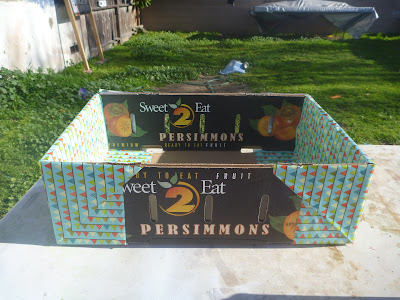 And rolled out more paper for the front. Using my yardstick, I roughed out where the box would sit and reapplied my spray adhesive. 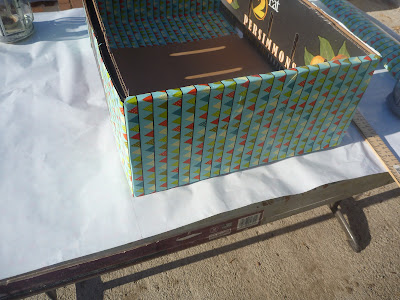 I then cut along the shorter lines and folded the flap up on both sides. 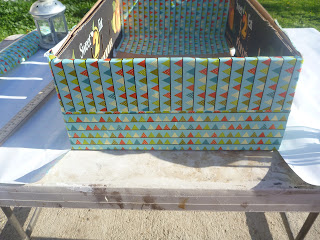 I folded down the corners 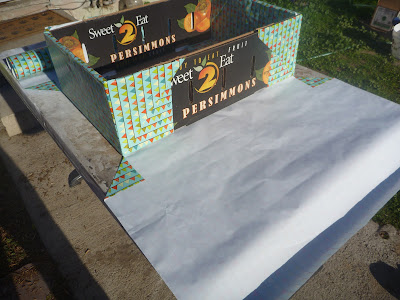 And pulled the paper up and affixed it to the front face and sides. 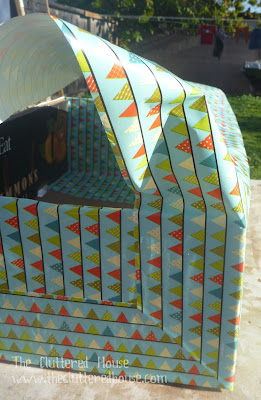 I then trimmed about an inch above the edge of the side to the corner of the paper. 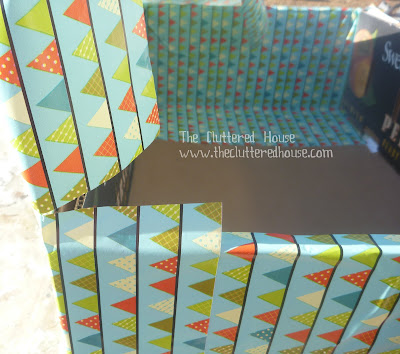 And then glued that down.

Then the camera battery died, so allow me to paint you a word picture. Fold the paper over, smooth and glue into place. Repeat for the other face. Then, cut a piece of paper the same dimensions of the interior bottom of your box and affix that over all the flaps. VOILA! You have a cute storage basket! 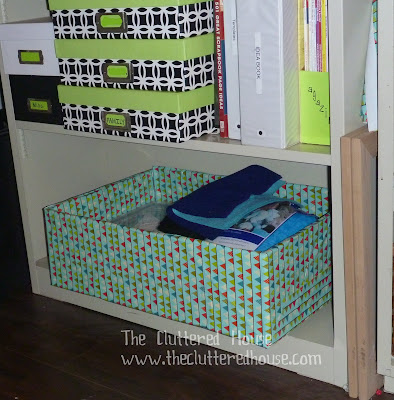 ﻿
So there you have it folks, an easy-peasy, lemon squeeze-y DIY project for your Saturday! Now go get yourself a free box and get to work!
And here's a little before and after if you want something to pin (because you're all pinning this stuff, right? RIIIIIGHT?!?!?!?) 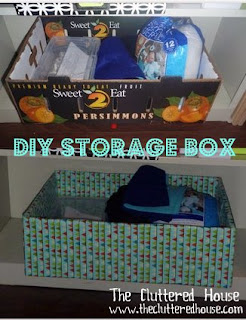 Posted by ClutteredMama at 6:00 AM