And the Prize Goes To...

On Thursday night, a package addressed to me arrived at my home.

I hadn't ordered anything recently, so I was perplexed as to what it could be. I noted the return address was "Award Claims Department," and giddily said to Diesel (in my very best dad-from-A-Christmas-Story voice) "It's a major award! Why it could be anything. It could be a bowling alley! You know a fella down in Terra Haute won a bowling alley... I sure hope it isn't fra-gee-lay," all the while wracking my brain for what contest I had entered. The only thing I had tried to win lately was a copy of Not Your Mother's Make-Ahead and Freeze Cookbook and I knew I hadn't won that give-away.

I tore into the box. There, beneath layers of bubble wrap and air-paks, lay a simple white box. I lifted it carefully from its wrapping. It was heavy. My heartbeat quickened at the thought of what untold treasure lay within. Diesel looked on expectantly. What could it be? What amazing thing had I won?

Slowly, I lifted the lid. I peeled back the gauzy foam wrapping, revealing my major award. I looked at it. Looked at Diesel and said "you have GOT to be shitting me," as I allowed one vitriolic giggle-snort to pass my lips.

The packing slip announced that the clock was, in fact, a "DeVry Anniversary Gift." 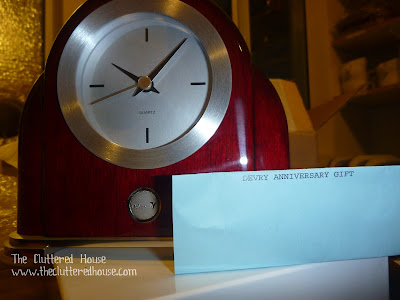 You see, back on August 20, 2012, I celebrated my 5 year anniversary with the aforementioned company. Much back patting and "what would we do without you"-ing ensued. It was a heady day. On September 19, 2012, I was laid-off as a part of a nation-wide downsizing.

And apparently, DeVry thought NOW, months after laying me off (and just as my unemployment is about to expire), would be the appropriate time to send me a commemorative gift. Fan-frickin-tastic.

I am not trying to bash my former employer. I was laid-off. A lot of people were laid-off. It was business, it wasn't personal.

However, this was just too ridiculous to not share. They sent me a gift for 5 years of service, six months after the anniversary, and five months after laying me off. WHO DOES THAT?!?!?!

So, dear readers, what do you think I should do with the "gift"?

Posted by ClutteredMama at 8:33 AM