Yesterday, I schooled you on heirloom seeds. As a result, I'm assuming you were SO moved by the information that you are now chomping at the bit to order some heirloom seeds, but need to know where you can find these little nuggets of joy.

Ask and ye shall receive!

This week has been a pantry week at the Cluttered House-- meaning I planned meals around only what was in our cupboards. We sort of cheated by going to Costco on Sunday, but we have needed to go for a while now. I also went to Trader Joe's to get milk and Little Man suckered me into buying applesauce pouches. So it is more of a pseudo-pantry week.

As a result of pantry week, I have been getting more creative with our meals. I'm not one of those people who can open up the fridge, pull out leftovers and whip up something delicious. I have an uncle, cousins, and a mother-in-law who can all do this. I open the fridge and think "ugh. I don't know what to do with this" and then announce that we have NO food and need to go out for dinner.

So, the mere fact that I have crafted any kind of meals out of just what is hanging around is monumental. Yesterday, the boys and I used some frozen chipotle black bean burgers to add some zip to our quesadillas, but the piece de resistance was on Wednesday when I whipped up some Macaroni Rosa using left over chicken and frozen peas. It actually turned out really yummy and I was very impressed with myself!

Of course, tonight, we had pancakes and eggs for dinner-- pumpkin-blueberry whole wheat pancakes, to be exact--however, I don't think Diesel much enjoyed the brekkie for dinner routine. I actually had planned to make two quiches (I use this recipe from 100 Days of Real Food, because it is easy AND delicious), but when I told Little Man we were going to have "egg pie" for dinner (one of his favorites) he said "AGAIN?!?!?!" in an incredulous voice. I guess I have been making it a little too often. Little Man then informed me that pancakes-- nay, "pancakes with pumpkin and blueberry inside of them"-- was a better choice for dinner.

In other news, my first set of canning jars has arrived. [Insert SQUEEEEEEEEEEAL here]. At my request, Diesel got me a boiling water canner and a set of canning tools for Christmas, but since we haven't planted a garden yet, we have had nothing to "put up." Until now. Because Costco has 10lb bags of organic apples at less per pound than I would pay for conventional apples. The boys can eat through a 10 lb bag of apples in a heartbeat, but I want to make sure we have apple products into the summer when they are VERY out of season and expensive. My plan is to make some apple sauce and can that as my first run. Fingers crossed!

Last, but not least, I totally scored a great find on Craigslist. I am a frequent scanner of the "free" section, but have never had anything pan out until this week, when we got THIS for free: 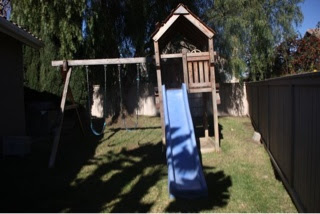 It is definitely rough and needs some work, but was TOTALLY worth the price! :) It will be a while until we have it assembled in our yard (this picture is in its original home), but I am BEYOND excited about it!

So that was my Friday Round-up! What's going on in your world?
Posted by ClutteredMama at 12:00 AM