When Little Man was about a year old, I was given a monkey bread mix and a bundt pan as a gift. I had never had monkey bread before-- in fact, I had never even heard of it-- but was stoked about the yellow bundt pan. Being game to try something new, I made the mix for our early Christmas breakfast that year and a tradition was born. Every year on Christmas morning, the Cluttered Family dives into a giant ring of ooey, gooey deliciousness!

Sadly, after that first batch of monkey bread, I was never able to find a monkey bread mix again (this being before I started paying attention to what went INTO mixes and my food, in general). So, in the pre-Pinterest era, I did the only thing I could do, which was to Google "monkey bread recipe." This brought me a bunch of recipes that used refrigerated biscuit dough. Again, in the years up until now, this didn't bother me much. Last year, I felt iffy about using them, but I was too exhausted (I had a non-sleeping 6 month old) to do much other than tsk at the horrible ingredients in the biscuits and then use them anyways.

This year, however, I was on a MISSION. A mission to find one, single, solitary monkey bread recipe that didn't use pre-packaged biscuits.

I scoured Google and Pinterest, but every recipe called for refrigerator biscuits. Not to be deterred, and because despite my lack of other home-making skills, I can bake the wheels off a truck (I even don't know what that means...), I decided that I would create my own damn monkey bread recipe. One that is free of additives and preservatives (though not healthy by any stretch). So I looked at some of my favorite recipes, cobbled them together and created a delicious, refrigerator biscuit free, recipe for monkey bread.

Since I know that I am not the only person in the world who likes tasty, fattening treats that are in no way healthy, AND likes to feel vastly superior because you can say you didn't eat any of the artificial junk that is in refrigerator biscuits, I thought I would share my recipe.

MMM... sugar with a side of self-righteousness, my favorite.

In a large bowl, mix together the flour, baking powder, 1Tb sugar, salt and cream of tartar. Using a pastry blender or a fork, cut in the butter (I like to chop it up into little pieces before I add it to the dry ingredients).  When the mixture resembles coarse crumbs, make a well in the center of the mixture and add all the milk. Using a fork (or your hands) stir until all of the flour mixture is just moistened.

Dump the dough out onto a lightly floured surface and gently knead it about 6 times-- just until it all holds together.  Set back into bowl.

In a Ziploc bag, mix the white sugar and cinnamon together. Break off pieces of biscuit dough and shape into 1" balls. Drop into the cinnamon sugar mix. When you have 6-8 biscuit pieces in the bag, shake to coat. Then place dough balls into a well greased bundt pan. Pack them in so they are arranged in a tight circle throughout the pan. If you are using nuts, sprinkle them on the dough as you arrange it in the bundt pan. Repeat this until you have two layers (vertically) of dough balls. (You may have some left over biscuit dough. I just patted out a couple biscuits and topped them with some of the leftover cinnamon sugar).

In a saucepan, melt the butter and brown sugar over medium heat. Bring to a boil and boil for 1 minute. Pour over the monkey bread (I use a silicone scraper to get ALL the good stuff out).

Bake at 350 for 30-35 minutes. Remove from the oven and allow the monkey bread to cool for 10 minutes. Turn out onto a plate (it is easiest if you put the plate on top of the pan, flip it as one unit and then lift the bundt pan off the plate. Less likelihood of dumping liquid hot magma-esque sugar on yourself) and serve.

No need to cut it, as it is a pull apart bread. Just relax and enjoy! 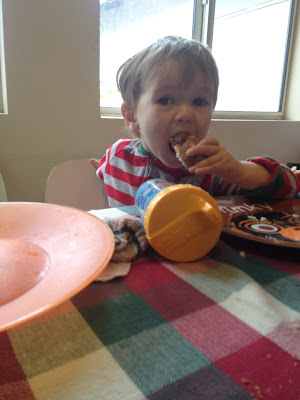 And not to toot my own horn, but Duckie thinks my monkey bread is delicious! (He and I may or may not have single-handedly demolished half the monkey bread when left alone in the kitchen after all the gifts had been opened on Christmas morning. I can neither confirm nor deny this information.)