Today, I am OVER THE MOON excited!

For years, I have been drooling over O'Keefe and Merritt stoves of the 1940s & 50s. In fact, I loved them so much that when we were house hunting, we went to what was clearly  a flop-house in a VERY seedy section of a nearby town and I actually contemplated putting in an offer solely because there was an O'Keefe and Merritt in the gutted kitchen.

When we bought our circa 1957 house, which will need a kitchen remodel, I started thinking about what I would want to do with the kitchen. Then I saw my neighbor's kitchen, in which she has a restored O'Keefe and Merritt, and an idea was born! A vintage inspired kitchen-- one that fits with the style of our 1950s house, but doesn't look dated.

A few hours later I received an e-mail from a friend from my hometown who said that she saw my pin and that her parents, who now live in Southern California, had the exact O'Keefe and Merritt stove sitting in their garage and did I want her to ask what they would sell the stove to me for. I said sure, thinking they would likely ask more than we could afford, but that it didn't hurt for her to ask.

She got back to me on the Friday after Thanksgiving and said her parents said I could HAVE it if we picked it up and hauled it away, but that her grandpa said he wanted $50 for it, because that is what he paid for it when he bought it secondhand from a neighbor in the 1950s.

FIFTY Dollars. This was a steal!!!! I ran it by Diesel and he acquiesced to going to get the stove on Saturday. Friday night I was like a kid on Christmas Eve. I was SO excited.

We picked it up last night and it is in GREAT condition. It is missing the clock & light, but was apparently missing those when my friend's grandparents purchased it. I'm hopeful that I'll be able to find one and have it restored.

The best part is the stove is in good shape and doesn't require massive restoration! (A full restoration of a vintage stove can run $1,500-4,000) We will have to have someone come out and check that everything is working safely, but then we can go ahead and use it NOW, rather than waiting for our someday renovation!

I'm absolutely in LOVE with it.

I know this post was outside of what I normally post about, but... I saved a ton of money and I bought something secondhand, so um... that is frugal and eco-friendly, right??? 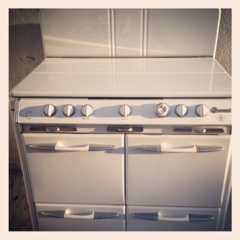 Posted by ClutteredMama at 4:02 PM