The Urban Homestead: A Book Review 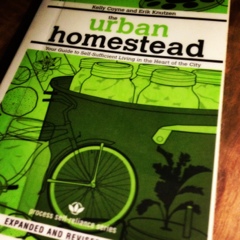 This past week I had a few minutes to myself and finally got to finish reading The Urban Homestead: Your Guide to Self-Sufficient Living in the Heart of the City by Kelly Coyne and Erik Knutzen.  I was really excited to read it because the authors live in Los Angeles, which is somewhat near to where I live. Oftentimes I read books on homesteading or gardening and they are either set in a rural location or in a city where public transportation is much easier to utilize, and the like, thus rendering the books inspirational, but not applicable. With Coyne and Knutzen practically my neighbors, I felt more of a "hey, maybe I can do this in Southern California" sense than with a lot of other books on the subject.

Overall, I quite enjoyed The Urban Homestead, largely because of the friendly and honest tone with which the authors approach their audience.They manage to strike a tone that very rarely wanders into the self-aggrandizing one that other notable homesteading authors use. I never felt preached to, or that if I didn't do EVERYTHING the way they did it, I was an abject failure and a blight on the planet.

To me, the tone is casual and friendly-- almost as though I was sitting down with some urban homesteading friends over coffee. My favorite part was in the chapter on transportation where Coyne speaks about her reluctance to convert to bicycling as her primary source of transportation out of fear of the drivers around her. I think that kind of honesty helps lend credibility to them. It isn't all going to be sunshine and roses and not everything is going to work for everyone.

One of the best parts of this book was that Coyne and Knutzen focused on making changes as you are able. It largely features achievable tasks and really emphasizes taking steps towards a more sustainable lifestyle, rather than presenting it as if one day you can just wake up and *poof* you're an urban homesteader with chickens and goats in the backyard and a wheat field in the front.

That being said, there were a couple of things that I did not like about this book.  I felt that while it is a great starter guide for what is required to become an urban homesteader, it lacked a lot of in-depth information. I realize that had The Urban Homestead covered everything in-depth, it could easily have become an 800 page tome, but a bit more information in some areas would be helpful. On that same note, however, I did like that they often included the links to where to find more information on many of the topics discussed.

The other issue I had with this book was that the chapter on transportation talks about biking, but never mentions how one might go about switching to bike as primary transportation in an urban/suburban area when you have children. Yes, yes, I know I can get a trailer, but a lot of the coverage on safety talks about single riders, not rider with trailer of precious cargo. Also, the logistics change when you are trying to get around with kids and no car. A little more information on that would've been nice.

Overall, I highly recommend picking up a copy of The Urban Homestead if you are at all interested in becoming more self-sufficient. I think Coyne and Knutsen have done a nice job of outlining a fair amount of information for those who are just starting out (or even just starting to toy with the idea) on a journey to becoming an urban homesteader. I know I walked away from reading the book with a giant list of ideas for around the house (including a solar heater for the bedrooms!).

You can check out more about Kelly Coyne and Erik Knutsen and their homesteading/self-sufficiency projects over at Root Simple.