Yeah, you heard me. I'm calling B.S. on all those blogger mamas who claim to get these adorable crafts done while their kids are at home and never ONCE mention the myriad interruptions by their darling cherubs.

Why? Because it took me darn near 12 hours to scrape and paint a tiny bench.

Let me give you some back story to today's tale. We moved into the NEW Cluttered House (NCH) at the end of June. On the 4th of July, Diesel and I were kidless for the day-- we had spent the majority of the day sanding floors whilst the kids were with my in-laws-- and before heading out to the fireworks, we had the opportunity to sit down over a couple of margaritas and figure out when we wanted to do our housewarming party/open house thingamajig. We decided on October 6. Our rationale was it was three whole months away. Surely we would have the house put together and lovely by then. Fast forward to the last 2 weeks and we have been scrambling to get the house in some semblance of "together."

On Wednesday, 3 days pre-housewarming, I still had no curtains put up or photos on the walls, so I put out the SOS to my sister-in-law (who has a much better eye for style and design than I) and she  came over post haste to rescue my sad, undecorated living room. Under her advisement, we rearranged the shoe shelves and mail sorter and created a "mudroom" of sorts in my living room-- complete with a "vignette" of photos on the wall (her words, 'cuz she knows to say stuff like that). Yet the "mudroom" was missing something. There was a glaringly blank space under the front window. Still high from creating a vignette of photos and incorporating "wall chotchkes" into it, I looked at my dear SIL and enthusiastically exclaimed, "OH!!! I know what we can do!!! You know that bench that we used to have on the patio at the condo? I could TOTALLY paint it white and put this cute green pillow I saw at Costco on it! That would totally tie the look together (I only say stuff like "tie the look together" when I am conversing with the stylish people in my life) and it would be SO easy to do."

A little info about my friend the bench. It was purchased for $5 at a flea market in 2005. I had fully intended to do some cute paint treatment to it, but I never got around to it. When we were fixing up the Original Cluttered House (OCH), I used it as a step stool while painting, so it got a lot of paint splatters on it. Then it was relegated to the front patio, where it lived for the duration of our tenure at the OCH, doing time as the occasional plant stand, but generally just sitting there unused and dusty. 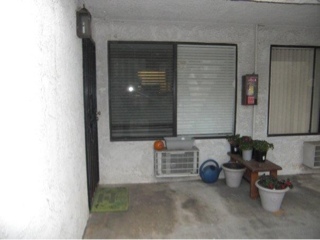 After moving to the NCH, it was treated to the further indignity of being left on the back patio/yard where I allowed the children to paint it with whatever paint was left on our paint rollers after various interior painting projects. 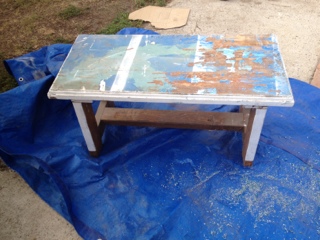 But all that was about to change. Benchy was going to get a "quick" and "easy" overhaul.

Thursday morning laid a tarp out on the patio, got the paint scraper out and began scraping. Little Man walked outside and, in a voice filled with dismay, asked WHAT I was doing to HIS painty bench. I told him I was fixing the bench up to go inside and after a few minutes of reassurance, he decided he was okay with the new turn of events and allowed me to proceed. Then it was time to take Little Man to school.

When I got back to the house, I put Duckie down for a nap and got back to scraping. Of course, this would be the day that he decides he only needs a 45 minute nap, instead of the usual 2 hours. So now I have a clingy, undernapped toddler that I am dealing with. By the time I got him all sorted, it was time to go get Little Man from school. Then it was lunchtime. While the kids were eating I got out the paint and rollers and started painting. I think I stopped no less than 2 dozen times to refill drinks, shoo the dog away from the kids' food, give more food, answer questions, etc.

Then the kids came out to play. First they were playing nicely in the play area and I only had to stop and shout things like "Stop doing that to your brother!" "Give that back to him!" "We don't hit" and "We don't put mud on our baby junk," a few hundred times. All in all, a good play day. Then Little Man decided he wanted to "help." We're big on letting our kids try to help when they can, so I gave him a roller and let him have at it. 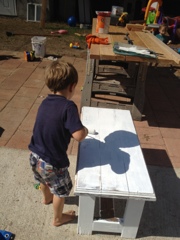 He was doing a good job & I was praising him and taking photos when I realized I had lost sight of Duckie. I turned around to look for him and to my horror, I saw that he had dipped his foot in my paint tray and was walking across the newly laid paver patio. AWESOME. 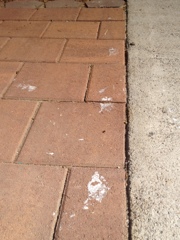 All in all, my "quick" painting project took me about 12 hours to complete. I could've blogged it as a "cute, quick" project for you guys to try, but I thought I'd give you a dose of my reality instead! I think you deserve the honesty!

In the end, the finished product looks good (if you don't look TOO closely) and my patio has tiny baby footprints on it, that I'm sure I'll cherish someday! 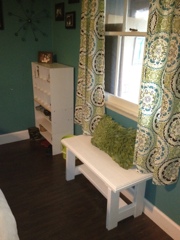 Posted by ClutteredMama at 1:09 PM