A Return to Organization

So in my return to reorganizing and simplifying, I decided to tackle a task I have been putting off for ages: MY BATHROOM VANITY DRAWERS. The large bottom drawer needed minimal clean up-- just needed to toss some pregnancy/ovulation tests (won't need those again, thank you very much) and a curling iron that I haven't used in almost 15 years; however, the two mid-sized drawers were out of control. 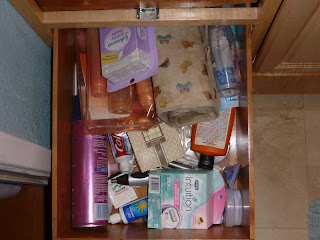 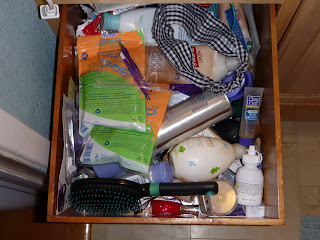 All kinds of junk I have not/do not/will not use.  So I dumped everything into one big bucket and went to town!

At the end of all my purging, I had boiled it down to this: 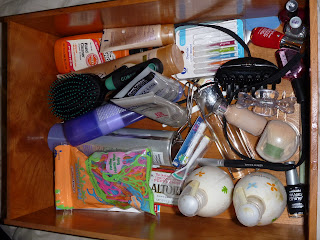 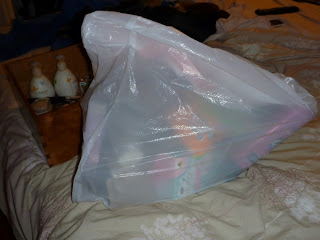 A drawerful of stuff and a big bag of trash. Some stuff was relocated to its rightful home, but most of it was junk.

Now I have a nice clean drawer for hair & makeup: 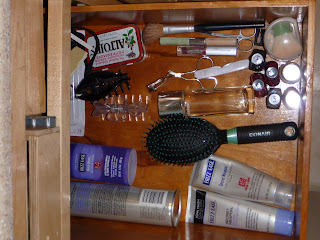 And a drawer of lotions and potions: 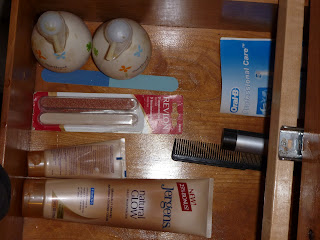 Sadly, I admit that my beauty products are not NEARLY as green/eco-friendly as I would like. but I'm working on it. I'm having  trouble finding really good organic products for curly/frizzy hair. I'm taking suggestions, though!

I'm feeling rather accomplished now!
Posted by The Queen of Leen at 9:00 PM